The Swedish gymnast Per Henrik Ling is called the “father of Swedish Classic Massage”  from when he opened the Royal Gymnasium Institute in Stockholm – 1813, 200 years ago. He developed his own comprehensive system of athleticism and treatments – Swedish gymnastics and massage, to stimulate blood circulation, strengthen the muscles and create a better balance between bones and muscle tissue.

Ling’s system was fast spread over Europe and the popular treatment method was one of the greatest exports from Sweden under the nineteenth century. Students arrived to Sweden from different parts of the world to learn and then started their own practice in their home countries and both the methods and literature was spread early and translated into several languages. Many of the international expressions within manual therapy and massage came from Ling’s followers, such as “medicina gymnastica”, “therapeutic manipulation” and “kinesitherapie”.  Note that these were published in the beginning of the nineteenth century, long before the establishment of other western manual therapies (such as osteopathy, chiropractic and orthopedic manual therapy.)

At our LivNordic Spa in Stockholm, this treatment is of course the most popular one and our Swedish Training Director, Isabella dos Santos, has developed the basic techniques further, to create an exceptional massage – unique for Raison d’Etre and LivNordic. 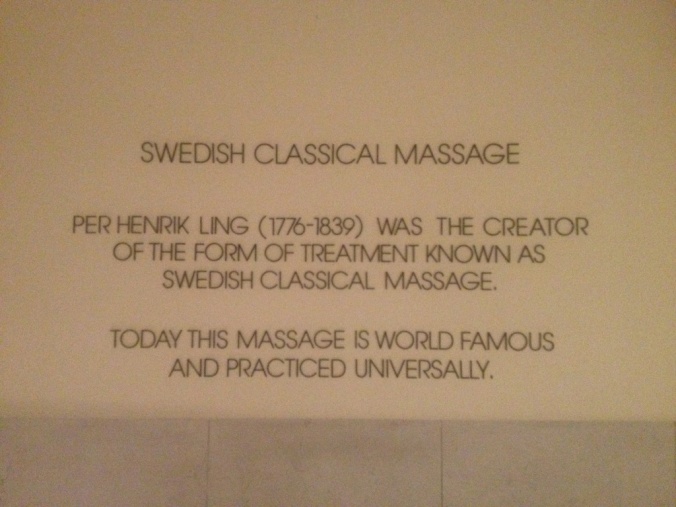 Wall inscription about Swedish Classic Massage at our LivNordic Spa in Stockholm.

Swedish Classic Massage (or actually just ‘Classic Massage’ as we say in Sweden) has definitely been a source of inspiration for most of the western massage techniques and is still one of the most popular treatments booked in the world. So, why do not do as we do, go ahead and find a place near to enjoy a Swedish Classic Massage and celebrate the 200 years anniversary with us!